The journey by train from Jaipur to Lucknow is scheduled to take between 11 hours 15 minutes and 16 hours 00 minutes depending upon which train service you take. Via the shortest route the distance travelled is 566 km.

There are 13 direct train services from Jaipur to Lucknow.

Use the Search Box below to buy your train tickets from Jaipur to Lucknow.

Jaipur Junction Railway Station is 5.8 km by road from the Albert Hall Museum.

Lucknow Charbagh Railway Station is 5 km by road from the Bara Imambara. 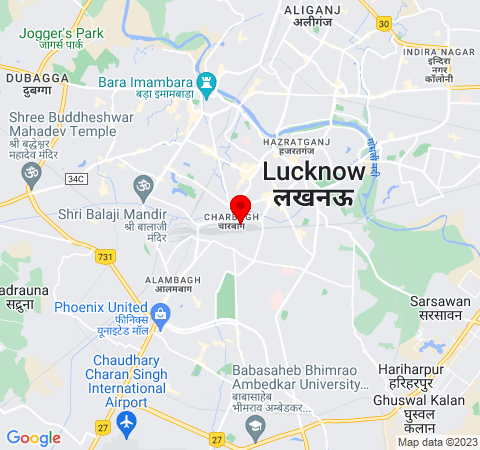 Lucknow is the capital city of Uttar Pradesh state with a population of around 3 million permanent residents. Lucknow rose to prominence as a cultural centre during the reign of the Nawabs in the 18th and 19th Centuries. Nawabs were semi-autonomous rulers closely linked to the Mughal Empire. Their status allowed them the funds to engage in patronage of the arts and massive building projects, particularly palaces and mosques. There are lots of these in Lucknow. The most impressive of which is the Bara Imambara. The Bara Imambara is a massive complex of religious and civil building constructed over a period of 7 years from 1784 to 1791. The project took place at a time of famine and provided work for 22,000 local people and is believed to have been conceived of partly as a job creation scheme.

Other notable Lucknow buildings in Lucknow include: